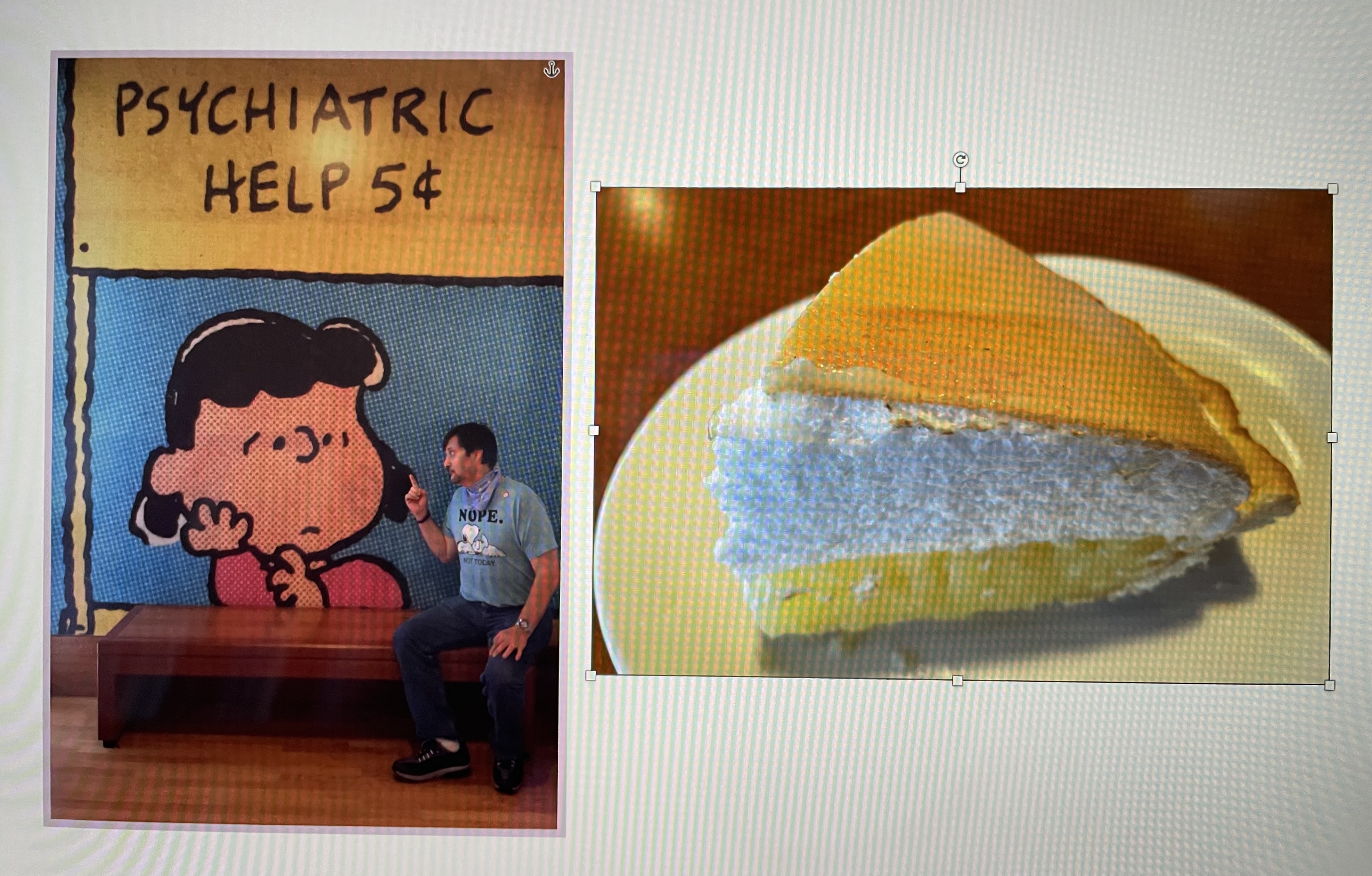 Today marks Globfly’s 44th-Month Angelversary—three years and eight months since he relocated to heaven on 12/17/18. Life keeps going, and I will keep his candle burning as long as possible. He made every day a day I looked forward to, and that’s something worth cherishing.

This month I’m celebrating Globfly’s memory with two things he loved. We typically visited Charlie Brown and the Peanuts Gang about this time of the year, so I found an adorable photo of Globfly talking with Lucy. So cute. 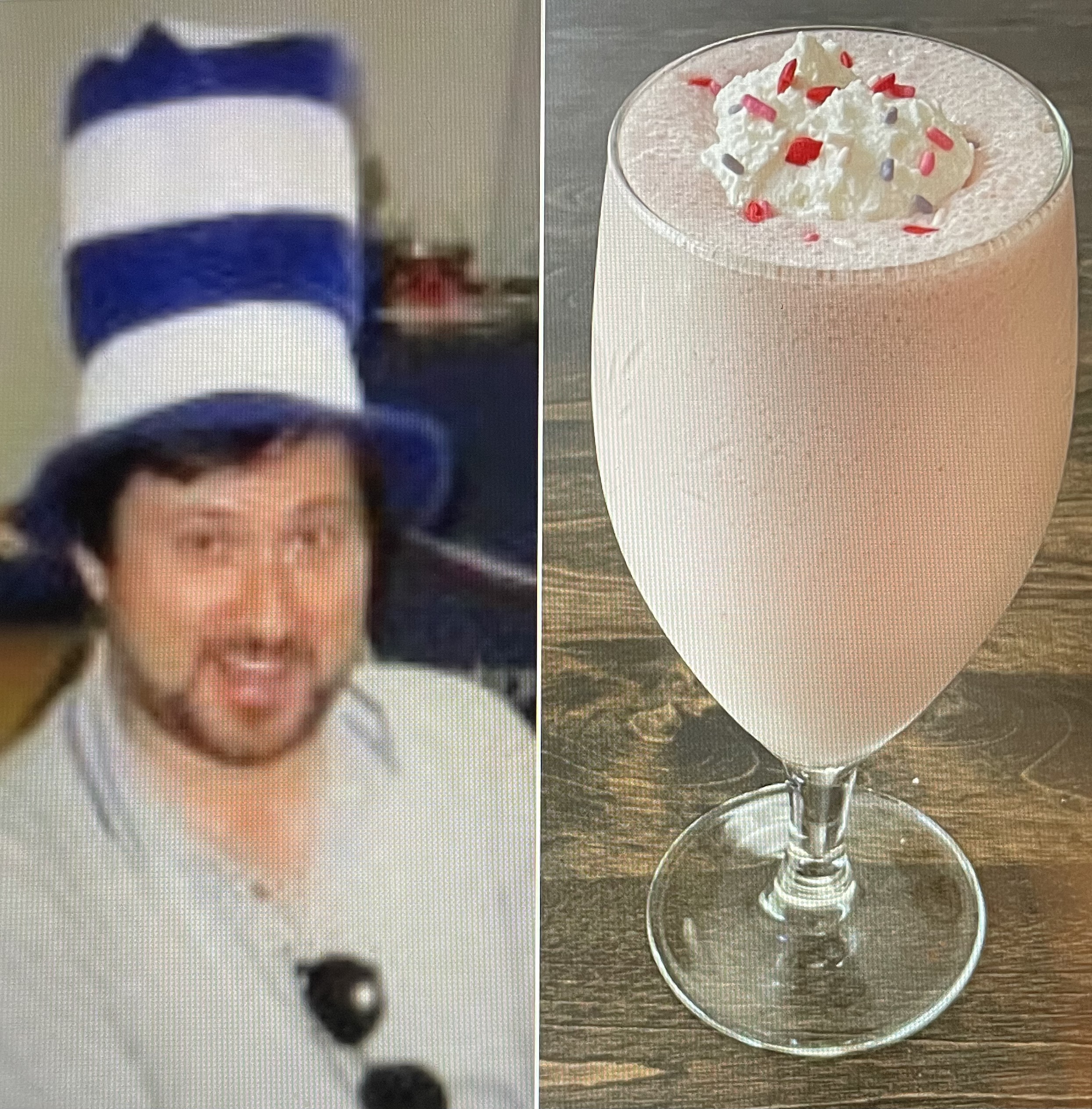 Today marks Globfly’s 43rd-Month Angelversary—three years and seven months since he relocated to heaven on 12/17/18.

As I thought of Globfly, I got nudged to honor his memory with a homemade strawberry milkshake. Because it was such a gorgeous summer day, that’s what he would’ve made. Making it for him today put a smile on my face as I reminisce him standing right where I stood and observing him adding the ingredients into the Blendtec. Strawberry was his favorite milkshake, and NOM, it was so yummy. He would have approved. It was delish.

Cheers to you, Markie, a nice cold strawberry milkshake just like you liked it. 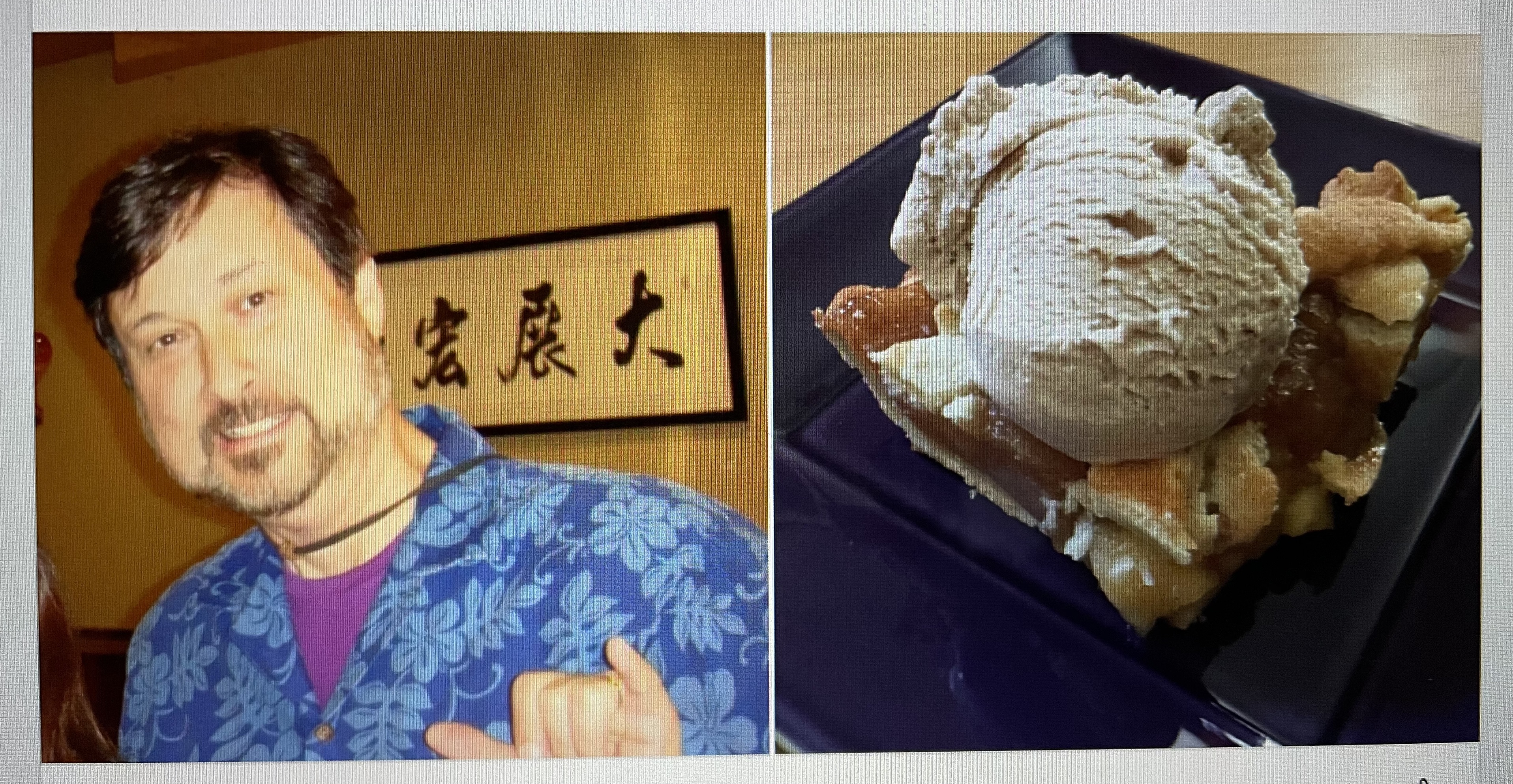 Today marks Globfly’s 42nd-Month Angelversary—three years and six months since he relocated to heaven on 12/17/18.

One of the things Globfly enjoyed was apple pie, and since today is National Apple Strudel Day, he’d be pleased that I am honoring his memory with apple pie. He wasn’t fancy to strudel. Fine by me.

Now, it wouldn’t be the same if I didn’t add my personal touch to this treat, now would it? Remember, I’m always looking (even now) for new goodies that Globfly might like? Guess what I found? Snickerdoodle ice cream! Yes! You read that correctly. Here’s the caveat, it isn’t regular ice cream but a compromise. (He was real ice cream. not me.) I would’ve dolloped it on and let him marvel over the Snickerdoodle flavor. Then after he smacked his lips and nodded his head, I’d move in for the win and reveal that it was “So Delicious” cashew milk ice cream.

Yeah, I know. The games people play. You have to admit. It works to get some folks to try something new. Globfly was a trooper. Sure, he’d resist, but he’d do it for me.

The bottom line was he relished Snickerdoodles. So, he would indeed enjoy this ice cream. It was my first time trying So Delicious ice cream, and People, IT’S DELISH!

Man, Markie, you would luv it! I know it! I owed you apple pie. You know I’d make good on it, eventually. So, here’s to you, Globfly. What better day than today to deliver, right? Happy National Apple Strudel “Pie” Day! Yes, hon, for you, I eat apple pie a la mode! 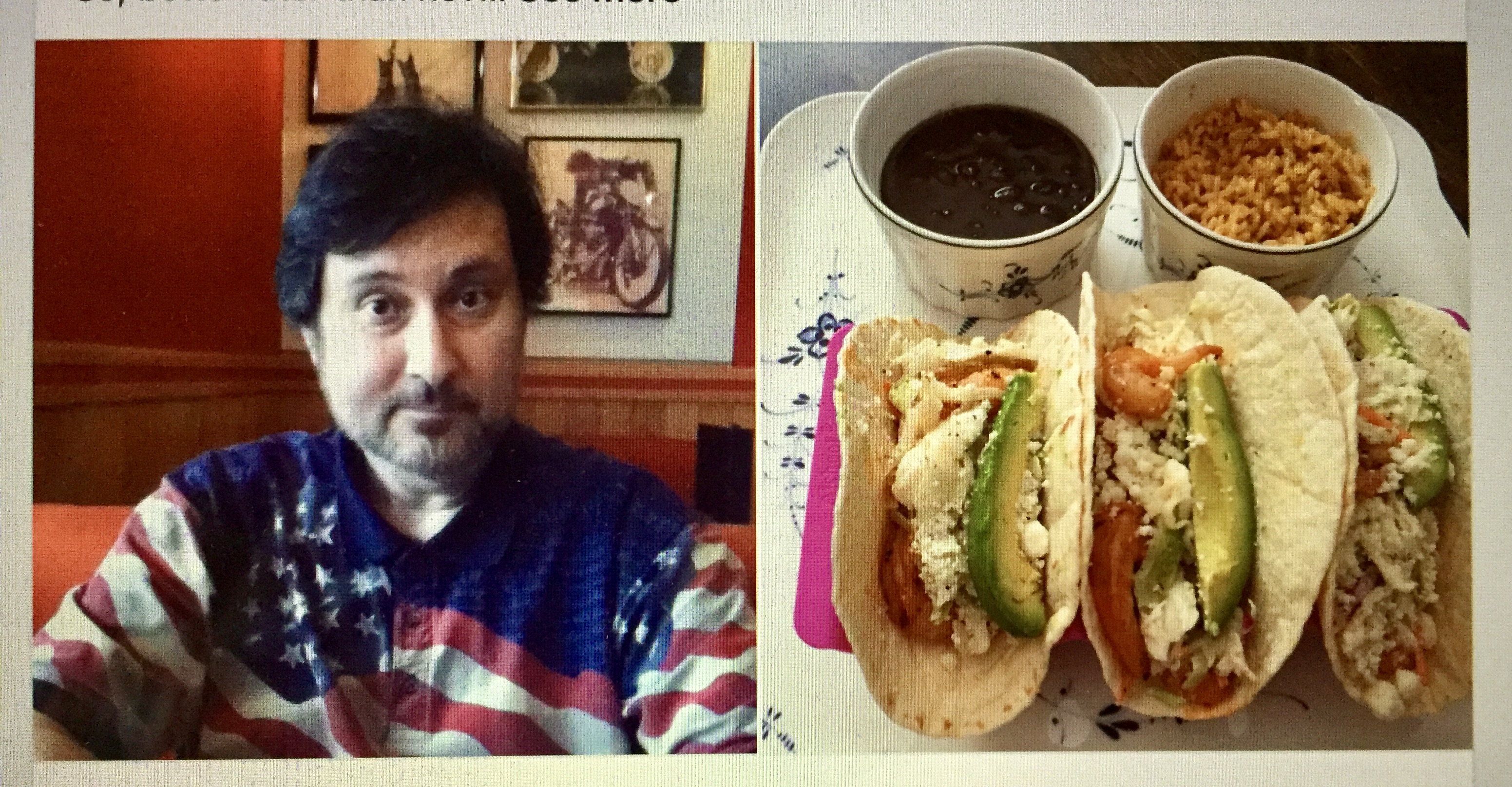 Today marks Globfly’s 41st-Month Angelversary—three years and five months since he relocated to heaven on 12/17/18.

One of the things Globfly enjoyed was Taco Tuesday. I was oblivious, but he kept track. National Taco Tuesday isn’t until October 4th, but since Globfly’s Angelversary lands on Tuesday this month, I’m gonna make this Taco Tuesday. He would love it. 💜

Globfly, I meant to join you on Taco Tuesday one day, and I tend to keep my word. So, better later than never. Here’s to you, Globfly – Happy Taco Tuesday! 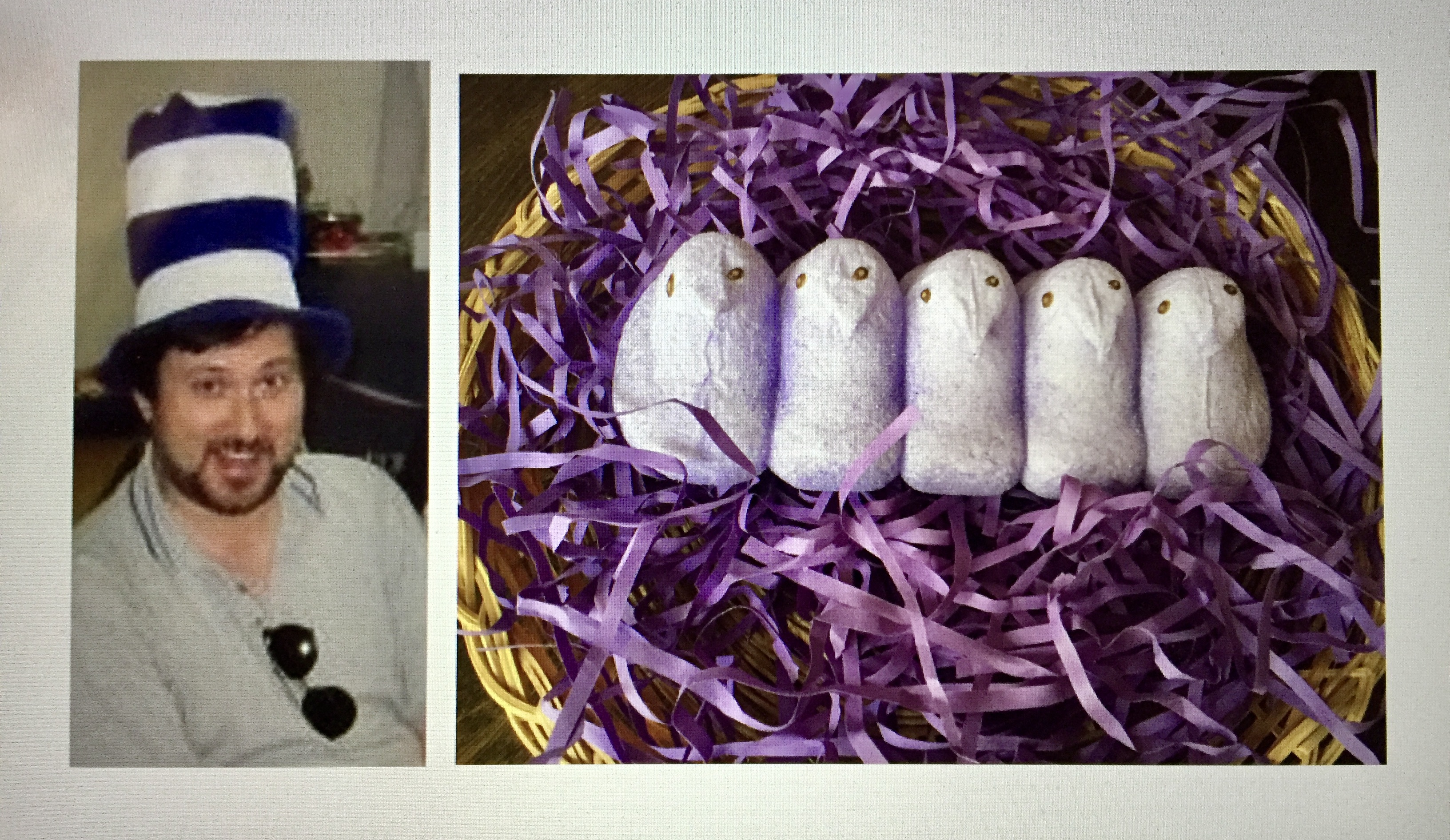 Today marks Globfly’s 40th-Month Angelversary—three years and four months since he relocated to heaven on 12/17/18.

Since this Angelversary shares Easter Sunday, it was a no-brainer to honor Globfly’s memory with a sweet treat that we enjoyed every Easter—Peeps, and it’s a bonus when I locate purple Peeps. It took quite a few stores before I found them today, but here they are. For you, Globfly, I go the distance. Just like old times, sweetheart. Maybe, not exactly like old times, but you know what I mean. “You and I, we were meant to be,” as the song goes. Thank you for always being!

“So, Globfly, enjoy all you want. I’ll eat what you don’t eat. Deal?

I never left home without my camera or my MacBook when we traveled. Globfly, on the other hand, never set out without his signature “Cat in the Hat” hat. There was this one trip where we were on tour in Rome. Our tour guide, fatigued from holding up his distinctive flag, told the group to follow the man in the “Cat and the Hat” hat. So, without further ado, here’s to you, the man in the “Cat in the Hat” hat. I miss you more than words can say, still!  ILYVVVVM.”  💜🖖👊 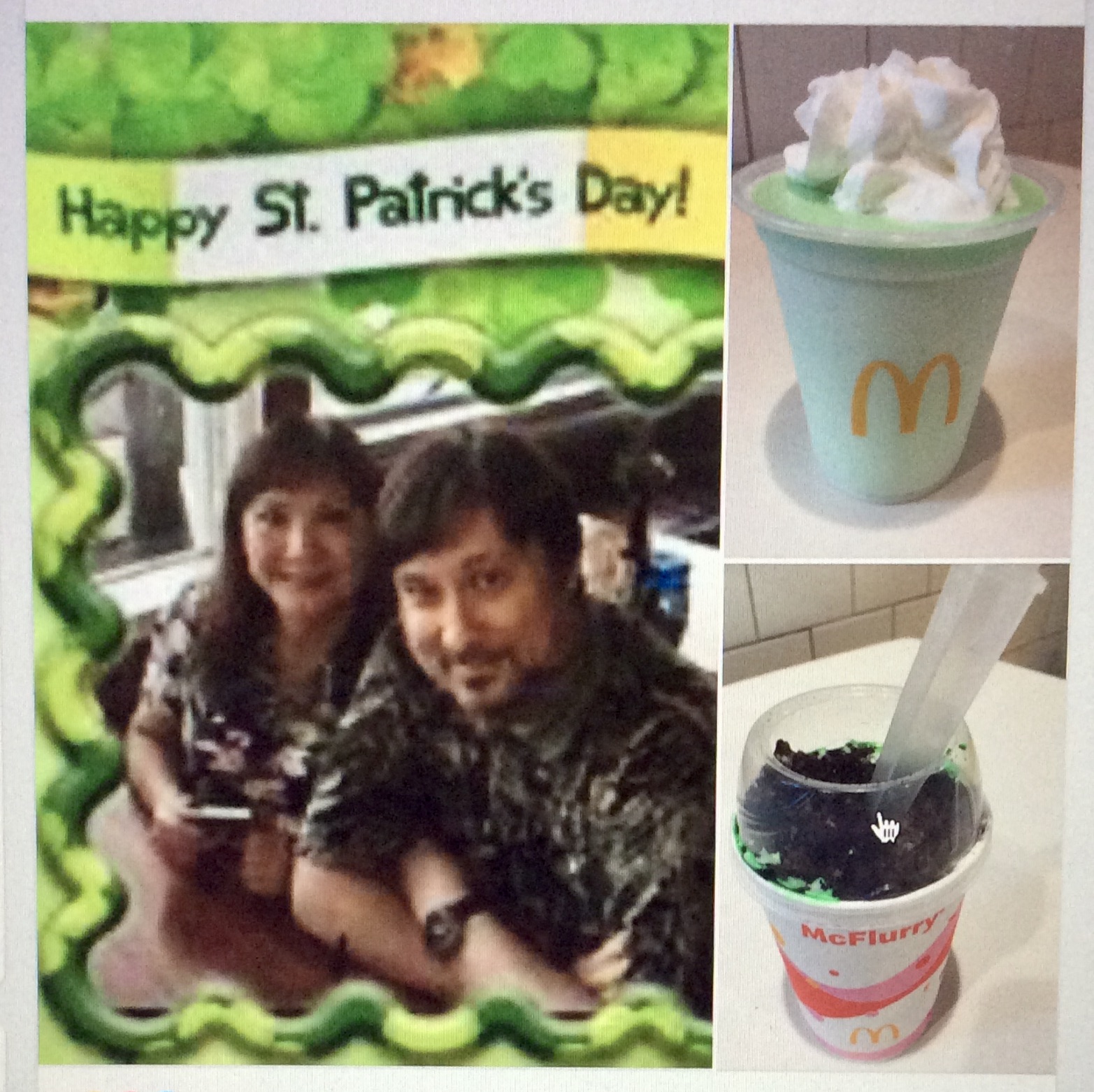 Today marks Globfly’s 39th-Month Angelversary—three years and three months since he relocated to heaven on 12/17/18. Time keeps on ticking by when it feels like just yesterday.

This Angelversary is an emotional one as it also marks the anniversary of Globfly’s first 10-hour surgery to eradicate cancer from his thyroids and lymph nodes. It turned out to be a moot point. Cancer refused to be annihilated, requiring a second 10-hour surgery a year later. Yet, cancer hung in there. However, Globfly was a trooper and fought the losing battle with numerous radiation and chemo treatments for eight years. Once leukemia jumped into the game, no transfusion was enough. His organs couldn’t take it anymore, and in the end, they began shutting down, one by one, and it was game over.

Every St. Patty’s Day for as long as I could remember, Globfly went to McDoodles (that’s what he called McDonald’s) for a Shamrock Shake around this time of year. However, he missed the last couple of years for various reasons. I forgot all about it until this week. So, guess what I’m honoring his memory with this month? Yep, you guessed it. I am honoring Globfly’s memory with a Shamrock Shake. Remember I’m always scouting new treats for him? Well, guess what I found at McDoodles? An Oreo Shamrock McFlurry! I know Globfly would’ve loved that, so I got him one. The creamy vanilla soft serve, blended with McD’s original Shamrock Shake syrup and OREO cookie pieces, was right up his alley. “Whaddaya think, Globfly? Good, right?” Since Globfly missed so many years, he gets both treats this month. 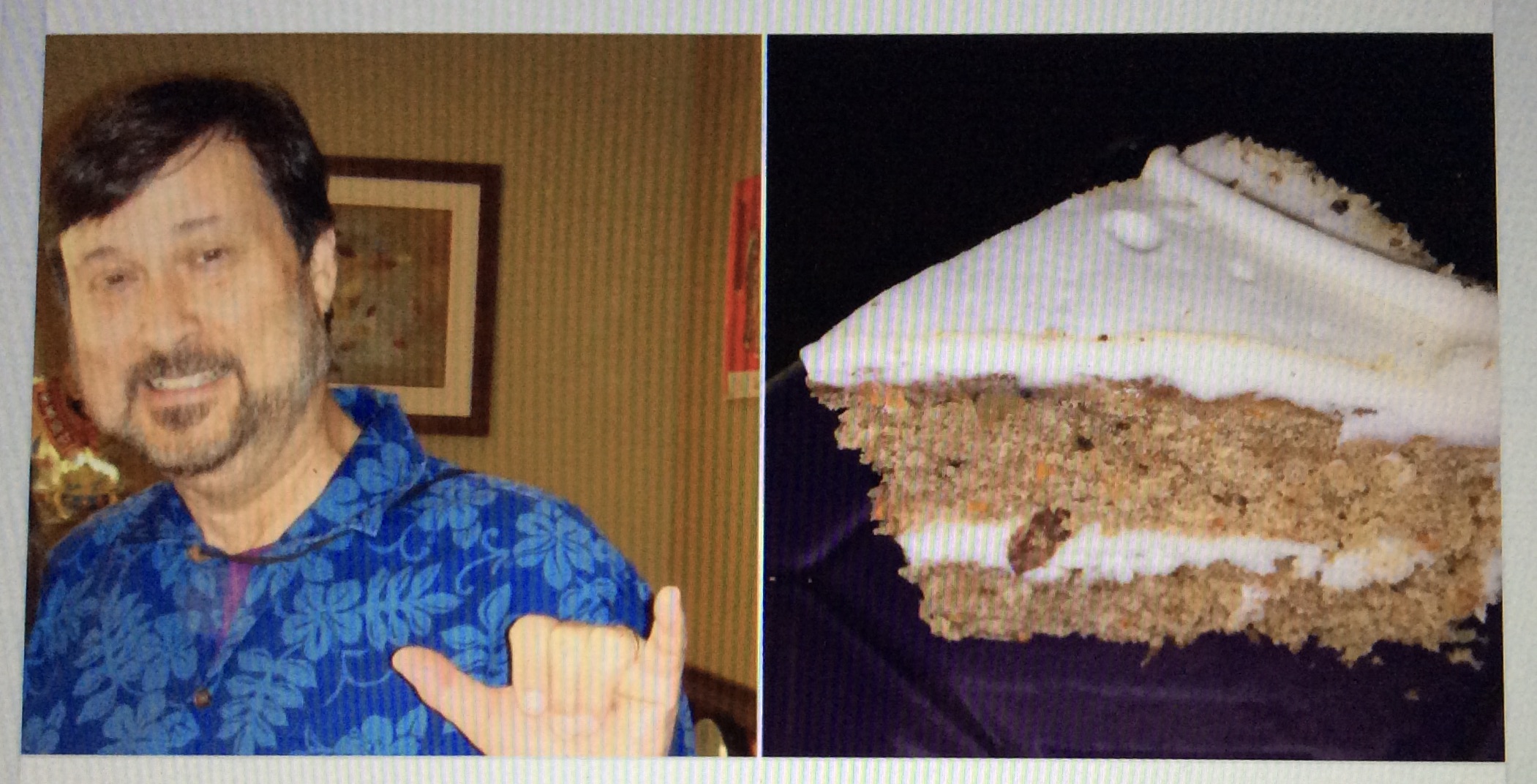 Today marks Globfly’s 35th-month Angelversary—two years and eleven months since he relocated to heaven on 12/17/18.

I am honoring Globfly’s memory this month with carrot cake. During Globfly and my early dating days, we often went to Arthur’s by the Park for carrot cake, which was another first that he introduced to me.

Today’s slice is not his favorite carrot cake, but I couldn’t see making a whole cake for one portion. His favorite carrot cake is homemade, a la my Big Sis’ secret recipe, which after years, I convinced her to give me the recipe. I’m grateful for it because I got to make it for Globfly many times. Also, with my ambitious writing schedule this month, I don’t have time to bake. This slice from Rubicon Bakery reminds me of Arthur’s, and I am sure Globfly would approve.

Globfly here’s to you, honey! I miss you every day more than words can say! ILYVVVVM 💜🖖👊

It’s hard to believe how time flies. Today marks Globfly’s 30th-month Angelversary—that’s two and a half years since he relocated to heaven on 12/17/18. Can you believe that? Since then, I started honoring his memory with something he loved—food—instead of tears to help me cope on the 17th.

This month’s selection is a slice of “Tropical Mango Coconut Piece Cake.” Because Globfly was a foodie, I loved buying him new treats as I discovered them. I bought him a slice of this cake during his last summer here. He loved it! Since Paris Baguette had just brought it back for this summer, I had to get a slice. Have you tried it yet? If you do, let me know what you think. I think it’s total yum.

Globfly here’s to you! I miss you every day more than words can say! ILYVVVVM 💜🖖👊 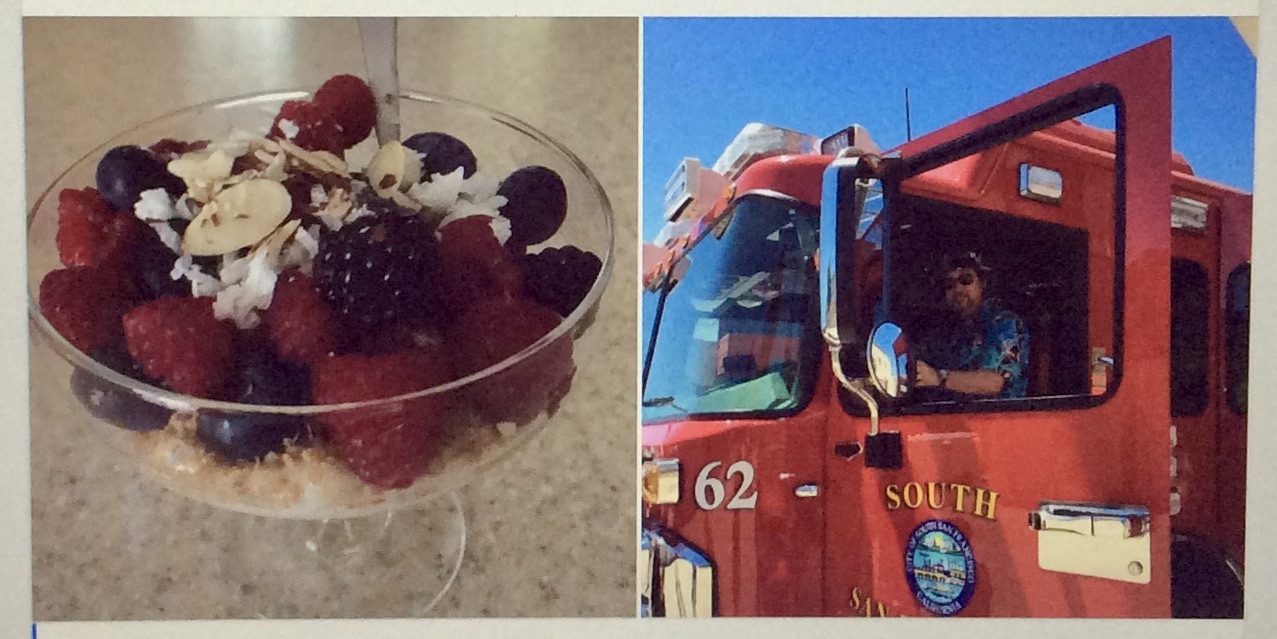 Today, on Globfly’s 29th month Angelversary, I am doing something different. Instead of honoring his memory with one of his favorite desserts, I made him this new recipe I just discovered, a very berry parfait. As I spooned this deliciousness into my mouth, I kept wishing Globfly were here to enjoy it with me. It’s divine, and I know he would’ve loved it. For that reason, Globfly here’s to you! I miss you every day more than words can say! ILYVVVVM 💜🖖👊

Tidbit: I don’t think anybody knows this. I’m going to tell you, but you have to promise to keep it a secret. Here goes—when I first met Globfly, he aspired to be a fireman, but life had other plans for him. 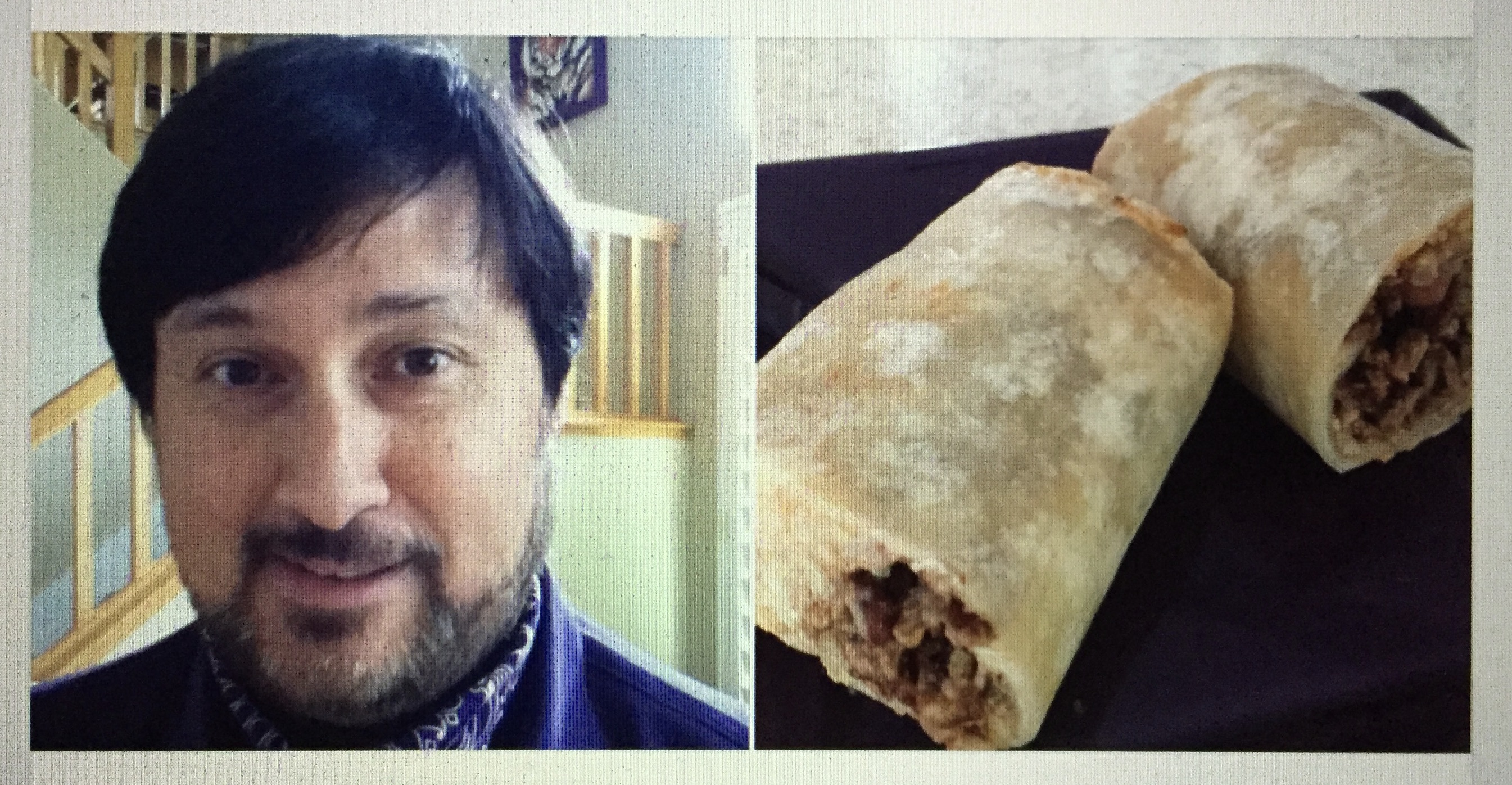 Can you believe today marks 28 months since Globfly relocated to heaven? It still feels like just last month, but it is what it is. Today, I am celebrating Globfly’s memory with my niece, who is staying with me. She’s here making up for the foiled May 2020 visit now that we’re both vaccinated. She and I had planned an El Faro lunch when she arrived. Then, I got an epiphany to honor Globfly’s angelversary with a beef burrito, which was one of his favorite items on their menu. His version would have been a super beef burrito with the works. I’m sure he won’t mind if I had a baby beef burrito instead. He knows it’s the thought that counts. I can see him smiling from above, watching me savor a beef burrito. Now, I get why he liked them so much. They’re delicious! I’m glad he was a foodie, and I can feel close to him simply by enjoying his favorite foods. “Globfly, I’d rather watch you enjoy a burrito, but for you, I will eat one…for you. I miss you dearly, still! ILYVVVVM!” 💜🖖👊