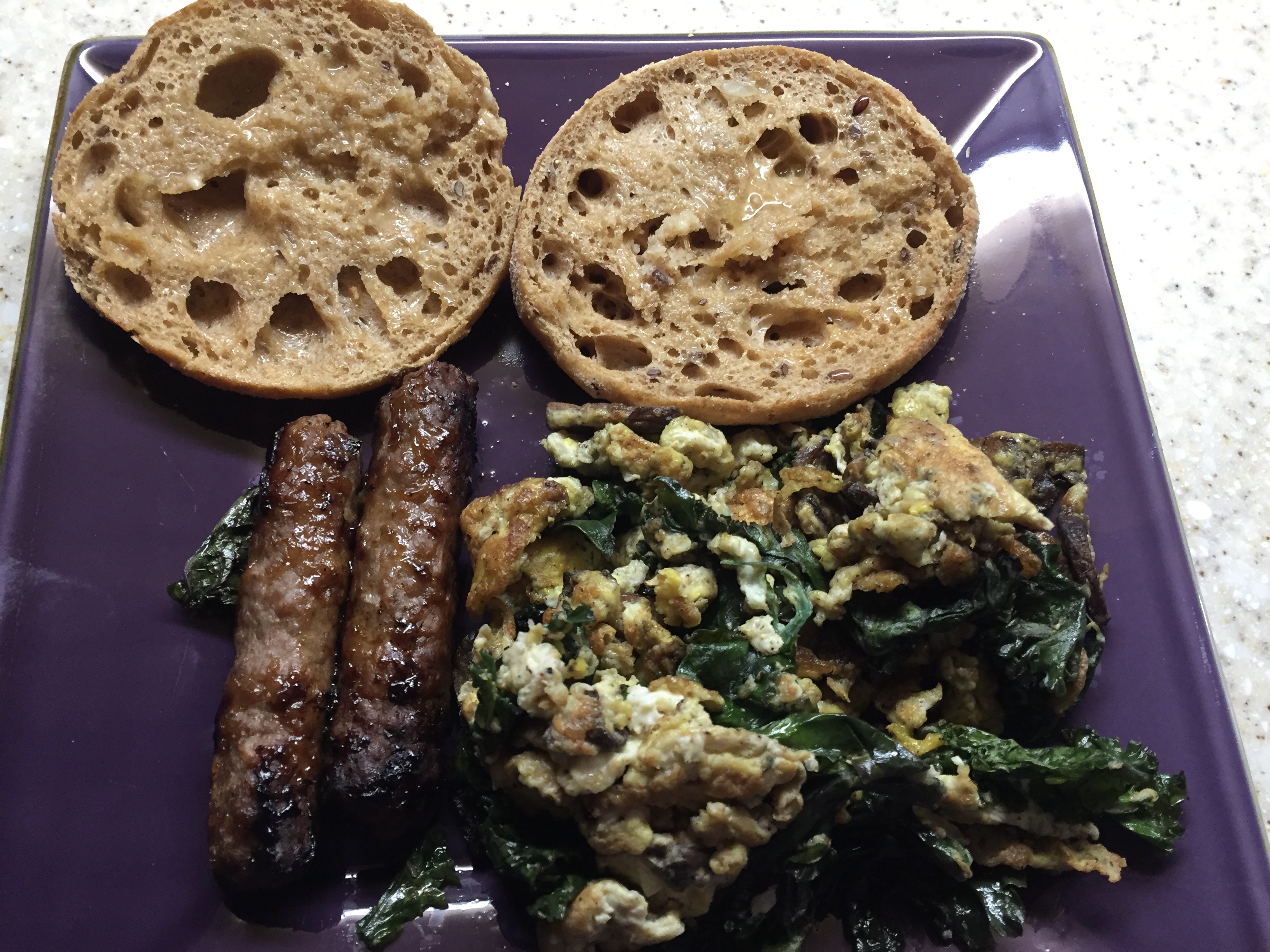 Wise people toss advice at us left and right, going in one ear and out the other. Particles of their words fell behind like stardust sprinkles affixed to our minds and revived when we least expect it. Like the other night, after posting my column, I turned on the TV. The Dubs and Grizzlies were warming up for NBA game 5. I scrambled to heat my breakfast for dinner and pitter-pattered to my makeshift dinner table, or if you prefer, the coffee table in front of the TV. With eyes trained on the screen, not missing a move, I plopped onto the toss pillows on the floor, picked up my fork, and began woofing down my food.

I hungrily bit into the Beyond breakfast sausage, alternating between kale and cremini scramble bites and the whole-wheat English muffin. Remember the advice not to watch TV while eating your meal, or the part about not rushing, eating slowly, and paying attention to what you’re eating? That was good advice had I heeded the warning.

I’m not sure what happened, when, or how, but something went down the wrong pipe. Like it or not, my body threw itself into a coughing fit—its survival mechanism to dislodge the alien, foreign object. At first, I was not alarmed, I’ve done this before, but since my status quo changed, I attentively made a point NOT to let myself be in this predicament again. Even the best-made plans go haywire if you’re not paying attention. I’ve luckily always been able to remedy this kind of situation. This time, however, for a scare, I wasn’t so sure.

Momentarily, I wasn’t even sure where the obstruction was since I was coughing so violently. I panicked. I sprung upright and began pacing, hoping for relief with every cough. It wasn’t happening. More water did not improve my situation. I still could not feel where the debris was. Now, I was alarmed. I’ve never had it this bad. I always knew where the culprit was, giving me an idea of how to dislodge it. A thousand thoughts rippled through my mind, including how they would find me. You know how people say, “my life flashed before me”? I went down that path for a smidgen of a flash.

I replaced those melodramatic, unhelpful thoughts with what I recalled from choking scenes. Initially, it felt hopeless without another person. It’s so dreadfully scary being alone when you’re choking. I can entertain the idea of having an iRobot standing in the corner, waiting for activation at a time like this. Sans that option, I quickly had to think before becoming a statistic. I reached back as far as I could and slapped myself on the back. Oops, not a good move! Now I know where the object was—right smack at the center stage of my windpipe.  “Houston, we have a problem!” I just blocked my windpipe!

I can still breathe but cannot squeak a sound! Slapping again made it worst. It was freaking me out! I banged on my chest—no go. I tried to make a sound—nothing. I was still breathing—a good sign. I gently tapped on my chest. Kept breathing. I kept testing for sound. Gentle tappy-wappy on the chest helped, giving me the idea of vibration. So, I kept tapping and included vocal warmups in various ranges, which shifted the object. Little by little, my voice strengthened. The audio vibration moved the object along, and I live to sing another day and tell you about the scary thing that happened to me.

2 thoughts on ““A Scary Thing Happened to Me””