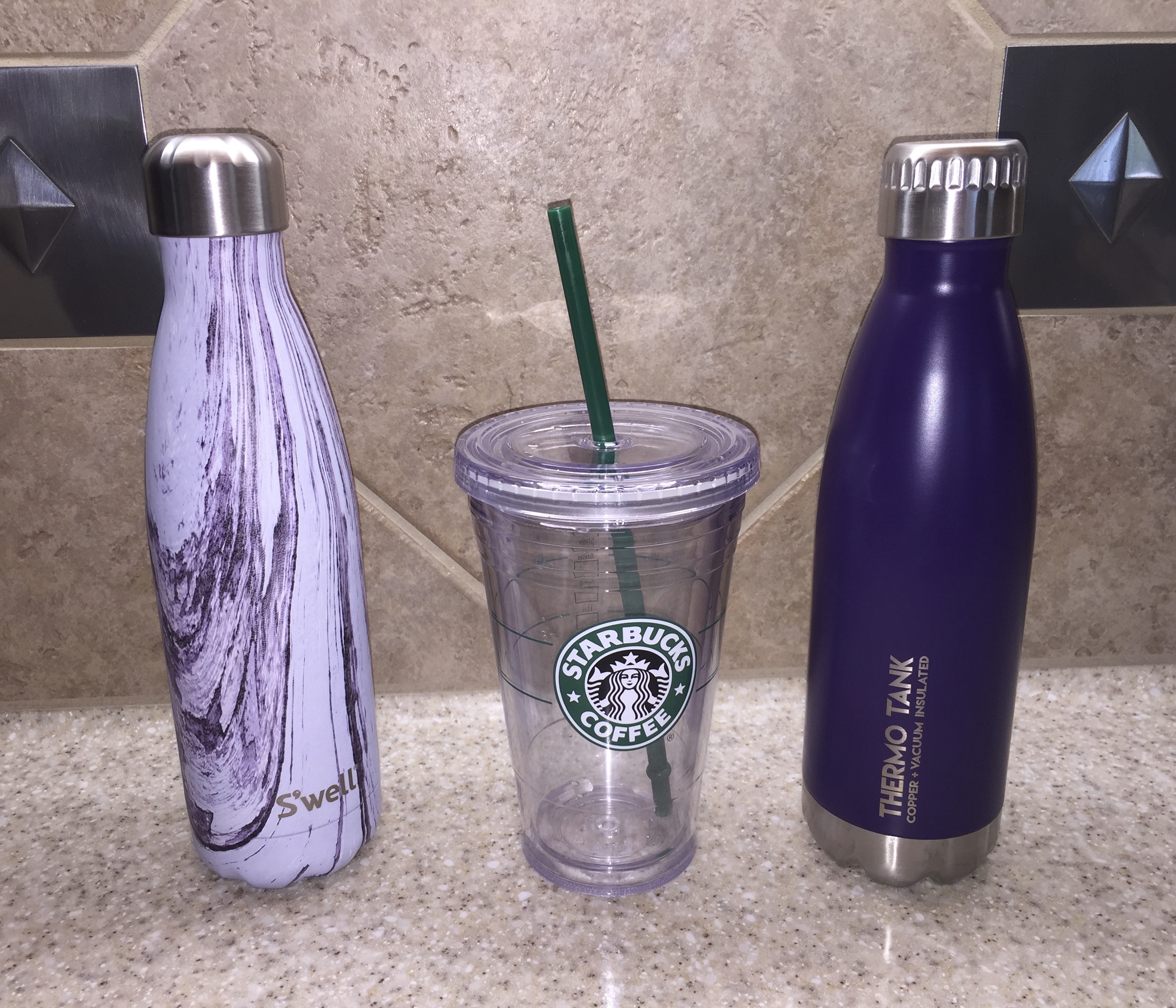 Now that I’m wearing the moisturizing lipstick all day long, I needed something to hold my water that wouldn’t get smeared with my lip color. I decided to use my Starbucks Frappuccino cup with the straw, which would be easier to wipe down after each use. I went out to the garage cabinet where all my water bottles and to-go cups were stored. As soon as I opened the cabinet door, I saw my S’well bottle on the bottom shelf and decided on taking that, and the purple Thermo Tank right behind it that I bought from Amazon for a fraction of the S’well bottle and I lucked out that day when they had a special daily deal making it a steal of a deal.

As I began to fill the bottles with water, a wave of emotions swept through me that brought me right back to the Kaiser Orchid Center when I last used these two bottles. I used one of these for ice-cold soda from my Soda Stream, and the other for iced water. Back then, I packed a tote full of goodies, both sweet and savory, to make sure that Mark and I kept replenished during Mark’s chemo treatments, blood and plasma transfusions. On longer days, I packed sandwiches or went out during his treatment and picked up a sandwich for him from Sprouts and sushi for me. I had the routine down packed. The cooler tote I last used for these trips remains untouched now—it’s lost its usefulness.

Before two days ago, I hadn’t thought about the Orchid Center or those days when we were regular fixtures there. Holding the S’well bottle in my hands transported me back in time as if I was just there yesterday. It all felt so real. I could smell the Pine-Sol floors. I could hear the crickety wheelchair coming down the hallway, and the nurse pushing the chair, saying, “Excuse me,” as she attempted to pass me. I could hear the nurses giggling at their workstations. I hear a patient coughing behind one of the curtains that separate the patients’ chairs. I smelled the sweet aroma from the neighboring patient eating a banana. I could see Mark resting in his patient chair with his expressionless face calm and collected, waiting for his ever-so-familiar treatment to begin. At the same time, I sat nearby, busying myself with whatever I brought to work on that day. Every so often, checking on Mark’s comfort.

I don’t miss those days of having to get him ready for his appointment, drive him there, locate a wheelchair, put him in it, and wheel him into the Orchid Center. Then try not to notice seeing his weak body pricked with IV needles that added more bruises to his collection. It felt so real seeing him there that I felt like I came home during his treatment, and any time now, I need to go back to the Orchid Center and pick him up. Sans the probing and pricking that came with his chemo and transfusions, it was wonderful seeing my beautiful husband so vividly again as if he were still here on this earth with me.