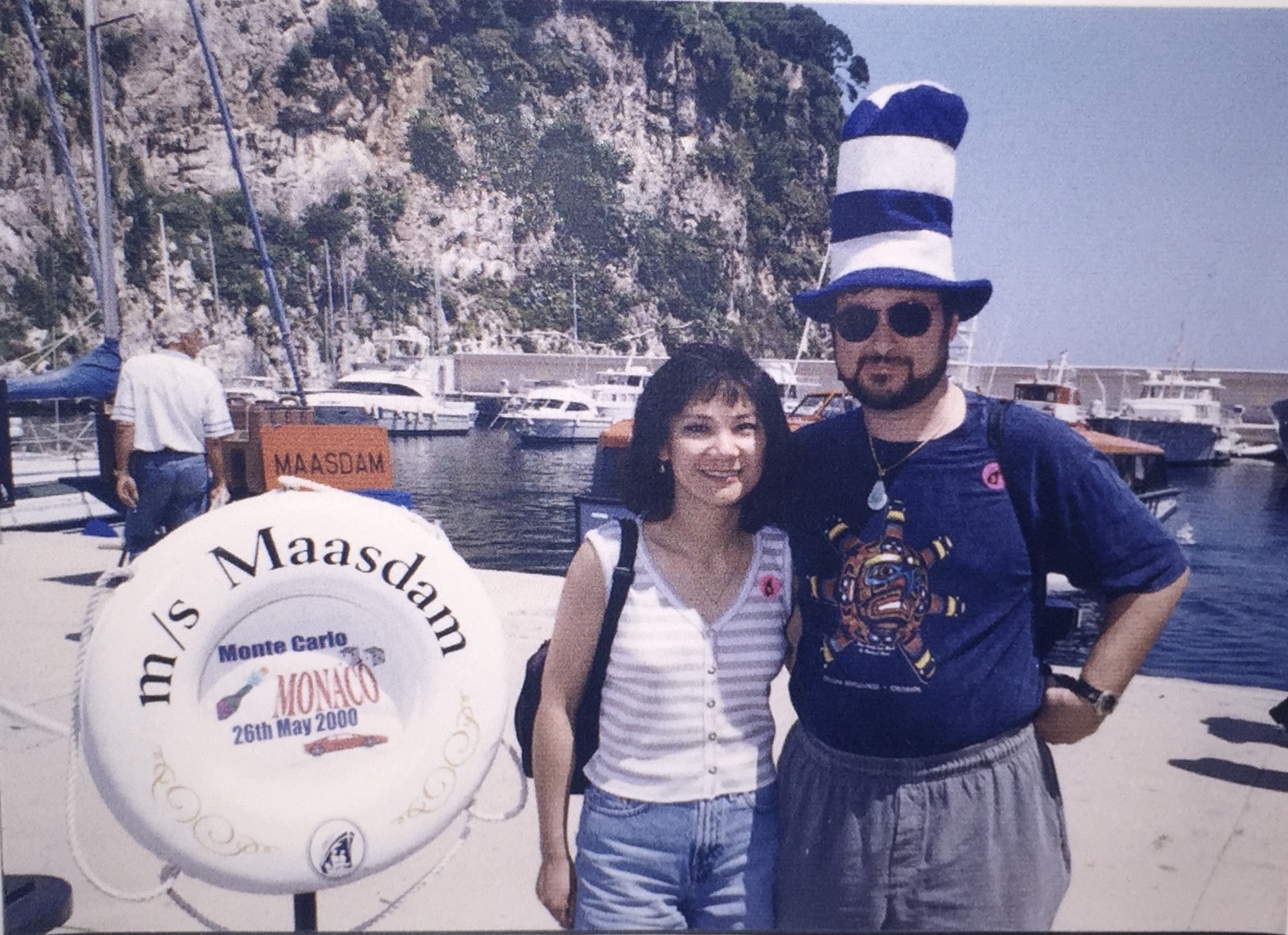 “Where is the photo of Daddy and me?” Not on my photo wall. Not on the photo counter, either. “Hm, where the heck could it be? I’ll take out the bins of photos and see if it’s there.” I flipped through envelope after envelope of photos. Nada. I turned page after page in the photo albums, but that photo was not there. “Where could it be?”

“Oh, look, there’s a photo of Mark and me taken on our Barcelona cruise,” I remember that day. We arrived a day early. Good thing since the travel agent messed up our itinerary, landing us in Portugal instead of Barcelona! Little did I know about geography back then. I remember asking the agent, “Can we rent a car and drive to Barcelona from Portugal?” I think had she not been embarrassed by her snafu; she would have laughed in my face. Instead, she stifled her laugh, and she explained it was like driving from New York to California. I guess driving was out of the question.

I don’t know why my first inclination was to find my own way there. She wouldn’t have stranded us. She remedied the situation by booking us a flight on Air Portugal. Geez, that plane must be far away. It’s so tiny! I remember thinking as we made our way to the airstairs. The funny thing was the plane never got any larger as we neared! Once onboard, I gasped. My eyes popped out of their sockets. My mouth dropped. There were only a few dozen rows of seats in the cabin! On the left side of me were rows of two-seaters. On the right side were single occupancy seats. I’m 5’4,” but I glanced above me and felt I could stand on tippy toes and touch the ceiling. Had my feet not been glued to the carpet, I would have back off the plane. This is a toy plane! Thank God it’s not windy today! Before I could think further, I got nudged along to my seat.

I passed the dainty flight attendant on my way, and the top of her head met my nose. She was wearing heels, too. A male flight attendant approached from the back of the plane, and he seemed leveled to my height. That’s the problem! It’s not a small plane. I’m a giant! Survival instinct—humor—to the rescue.

Once seated between my husband Mark and the window, my anxiety tripled. I wasn’t a chunky person, but I felt claustrophobic in my seat. I peeked at Mark, and he seemed fine. I glanced across the aisle to where the businessmen settled into their seats. None appeared bothered by the seat size. This is going to be a long flight. I remembered thinking about the three-hour flight. I settled in and fell asleep for self-preservation and from exhaustion.

Before the plane doors closed, the flight attendant served us candy from a mini bowl. During the flight, the attendant offered us coffee and a choice of cookies from a basket. A bit later, she served a complete meal with a sandwich, chips, apple, cookie, and a beverage. Wow! This was the closest to first-class I have ever been. It didn’t stop there. After lunch, the candy bowl came around again. Later, one last beverage before landing. I know this sounds too good to be true. I have to admit that I wonder if I dreamed it or lived it. I’m just kidding. We seriously got pampered on that flight.

We arrived at our hotel in Barcelona late in the evening to find they gave away our room. They expected us to check-in by 6 o’clock. The desk clerk was apologetic, but alas, there were no unoccupied rooms. There was a suite available if we didn’t mind taking it without extra charge. “No, not at all,” Mark and I said in unison as we smiled at each other.

So far, on this trip, nothing was what we were used to. Usually, we flew in a large plane and stayed in a standard hotel room. Had the bellhop not taken us to our suite, I would have thought we were in the wrong place. We stepped into the room and stood on the marble foyer, greeted by a couple of armchairs and a full-length mirror. In front of us was a hallway. To the left of the entrance was a fully furnished living room with a large TV and a cozy lit fireplace with an adjoining dining room. The hallway took us to a full wall mirrored dressing room outside of the bathroom that was the size of our kitchen and dinette combined at home. Beyond the bathroom, was the bedroom with windows lining one side of the room. There was another sitting area with a couch, coffee table, end tables, lamps, a fireplace, and yet another TV. The ambiance resembled a warm cozy log cabin out in the woods instead of a suite in a large hotel.

Before we unpacked and settled in, I hollered, “Don’t put anything down! We’ll never find it.” You see, back then, we lived in a studio condo. It was a large studio but alas a studio. This bedroom was as big as our condo itself.

In retrospect, I wish we could have stayed longer than a couple of nights at this majestic suite. I got to spend a bit of time there, but not quite the way I would have liked. You see, on our Barcelona city tour the next day, the guide brought us to a restaurant at 9 a.m. where they served the most delicious red wine I had ever tasted. I was sipping and having a merry time when the tour guide yelled, “Moving along,” so I gulped as much of the wine as I could before catching up with him—big mistake for someone who can’t handle her alcohol. Fifteen minutes later, I lost control of my eyes. Soon, I felt the alcohol in my cheeks, and onwards it made its way down my body, and by lunchtime when the tour was over, it was in my stomach. After the tour, I went back to the hotel room and rested until it passed. It took the rest of the day. I didn’t touch alcohol again for years after that.

As a whole, this was such a beautiful memory. If it weren’t for the travel agent’s mistake, we wouldn’t have had the silver lining experiences. If it weren’t for my failed attempt to find a photo, I wouldn’t have seen the picture that reminded me about this trip. With that said, I think I’ll give the photo wall one last pass before I call it a day. “Oh, wow, why didn’t I see that before?” There it was—the photo that I was looking for!

2 thoughts on “Snapshot Down Memory Lane”